Posted By: Tom D'Arcy on 9th January 2018 under insolvency, redundancy 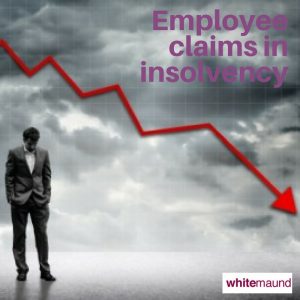 When the decision is made to place a company into an insolvency procedure and some or all of the employees are made redundant, this can leave employees in an extremely precarious situation.  As a consequence of the employer being insolvent, in many cases employees are faced with not only losing their employment, but also have the prospect of not being paid their wages.

The Government recognises that employees will have an immediate need for money following redundancy and created the Redundancy Payments Service (RPS) which is part of The Insolvency Service from which employees can make claims and receive accelerated payments.

What can an employee claim?

Where the employer proposes to make 20 or more employees redundant in a 90 day period, the employer is required to consult.  For between 20 and 99 redundancies in a 90 day period the minimum consultation period is 30 days and where the number of redundancies exceeds 100 employees, the consultation period extends to 45 days.  In many insolvencies, the decision to make redundancies is taken very quickly and accordingly this may result in the employer failing to consult.  Employees can apply to an Employment Tribunal which can award up to 90 days’ pay.

What will the RPS pay?

The RPS currently applies a statutory maximum of £489 per week in respect of all claims for arrears of wages, accrued holiday pay, pay in lieu of notice and redundancy pay.

In respect of arrears of wages, the RPS will pay a maximum of 8 weeks’ pay.  The weeks claimed need not be consecutive and can be the weeks that are most beneficial to the employee.  The RPS will deduct tax and National Insurance contributions from any payments made.

Holiday pay is limited to a maximum of 6 weeks’ pay where an employee had an entitlement to it in the 12 months preceding the insolvency.  The RPS will deduct tax and National Insurance contributions from any payments made.

In order to qualify for pay in lieu of notice, an employee must have been employed for at least one calendar month.  The statutory entitlement is one week where an employee has been employed for between one month and two years, or one week per complete year of service for any employees employed for more than two years.  The claim will be mitigated by any income received in the notice period and notional tax will be deducted by the RPS when calculating the amount due. The employee has a duty to limit pay in lieu of notice claims by claiming whatever benefits they may be entitled to. Benefit payments an employee receives, or could have received if the employee had claimed for them, will be deducted.

To qualify for redundancy pay, an employee must have been employed for at least two years.  The statutory entitlement is as follows:

Redundancy pay is limited to a maximum of 20 years’ employment and is calculated on the date when the statutory notice period expires.  Claims must be submitted within 6 months of the insolvency.

How does an employee make a claim?

In the period prior to an insolvency, the Insolvency Practitioner will usually gather as much information regarding employee claims as possible.  Letters will be issued to the employees confirming their redundancy and giving them information about how they go about making claims from the RPS and in the insolvency.

The RPS claims process is very straightforward.  The Insolvency Practitioner will obtain a reference number from the RPS which employees can then use to make their claims on-line.

The RPS is able to calculate claims for arrears of wages, accrued holiday pay and redundancy and make payments quickly, usually between 4 – 6 weeks following the insolvency.  Claims for pay in lieu of notice can only be calculated and payments made at the end of an employee’s statutory notice period.

How are claims treated in the insolvency process?

Claims submitted to the Insolvency Practitioner by the RPS and by employees for any residual claims they may have will rank for dividend in the insolvency process.  Claims for arrears of wages up to £800 per employee and claims for holiday pay are treated as preferential claims in the insolvency process and rank for dividend ahead of any creditors with floating charges and unsecured creditors.

Claims for arrears of wages exceeding £800, pay in lieu of notice and redundancy are treated as unsecured claims in the insolvency process.

If you or your business are in difficulties or would like some advice please do get in touch.