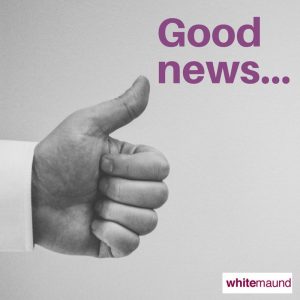 We are often viewed as the Grim Reaper of the business world, only called upon when a company is in dire need. But it is not all bad news, the role of an Insolvency Practitioner is damage limitation and making the best of a bad situation, often saving a company or securing the jobs of staff. We are often guilty of only reporting on the bad news rather than celebrating the successes, so here is a round-up of some of our GOOD news.

We were appointed as Administrator of multi-site pharmacy group in the North of England.  The introduction was via a high street bank and the pre-packaged sale resulted in the disposal of the business to a national pharmacy group.  All 42 staff were retained by the buyer and the secured lender was repaid in full. Unsecured creditors are expected to recover around 60 p/£.  We worked closely with the management team to deliver this result and shows our experience and knowledge of this sector.

We assisted a £5m turnover Company that could not meet the requirements of a HMRC time to pay plan.  HMRC would only allow a maximum of 12 months to settle the debt.  Whilst the management team were confident that the business was viable and had a strong pipeline with blue chip customers the cash flow would not support the Time to Pay requirements.  We successfully agreed a CVA with creditors after intense negotiations with HMRC to schedule the debt over 6 years.  This ensured the survival of the Company under the management of the directors and retention of the full workforce.

Having been introduced by the company’s accountant, we were appointed Administrators of a construction project management firm.  There was no prospect of creditors making a recovery had the company been liquidated.  During the administration we successfully recovered over £450k of disputed contract debts after lengthy negotiations and legal proceedings.  The case has been reported and is a leading authority for the recovery of funds in JCT contracts.  We anticipate paying a dividend of approximately 20p/£ to unsecured creditors having already paid the preferential creditors in full.

We assisted a charity which operated a nursery and pre-school which was experiencing significant financial pressures.  After lengthy discussions with lenders and creditors we successfully agreed a CVA which enabled the continuation of the nursery and employment of over 20 staff with an anticipated dividend of 21p/£ to the unsecured creditors over 4 years, after paying preferential creditors in full.

We continue to a see significant number of solvent liquidations.  In 2017 we were appointed in over 20 cases with assets ranging from £50,000 to £5 million.

One thing we will say if your or your client’s company  is  experiencing financial difficulty the key to finding a solution is getting advice early on. Please do get in touch if you would like to talk to one of our team.